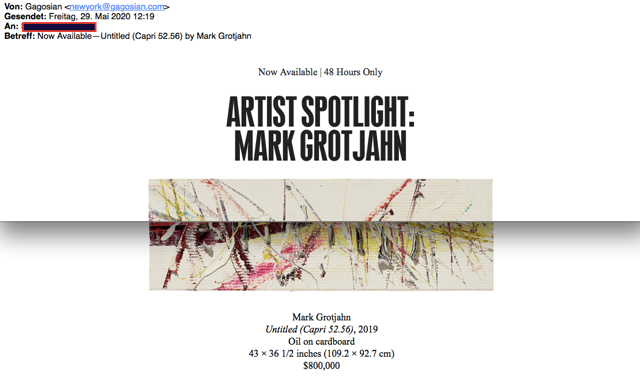 The “corona” moral of the art market – ENGLISH VERSION

The great concern of art buyers, artists, and regulatory bodies is the lack of price transparency in the primary art market (the market in which works are sold for the first time). Unlike many other industries, galleries generally do not publish prices for works. In some cases, they are hidden by the vagueness offered by a value range, or simply, there is no information at all. Knowing the price of a work of art involves asking directly, a task loaded with invisible obstacles that galleries have created to keep the curious away, as well as the competition. If one asks in person, in case of pretending to have the money to buy it, the front desk person will kindly immediately pick up the phone and dial the extension of the director or sales director, who will appear out of nowhere in the gallery space smiling. In some cases, the answer will be plain: “The work is sold.” or, “The work is not for sale.”

Many friends question me about the practice of art dealers. Why is the disclosure of the price of a work of art opaque? First, it is important to recognize that the art industry is devoted to the rule of price maximization, that is, it is interested in producing an increase in the price of the work of art. This is the first irregularity in the art market. As we well know, most industries are devoted to the opposite, to increase and lower production costs and to reach a greater number of consumers. Even the market for luxury items, such as designer clothing, produces a lower cost and more accessible line and collection. But the art market doesn’t work like that.

The opacity has served to create a convenient atmosphere in which the constant increase in the price of a work is possible without the confrontations or regulations that would be programmed by the disclosure of the values, which would be observed by control statutes, established and the state and by the same individuals in their role as buyers. If we take our common experience as consumers, we know that we are happy if we see that the product we are going to buy is at a discount, just as we are upset if we buy the product for a higher value than, for example, offered by another supermarket chain. But in addition, we know that an exaggerated value in a certain price can be considered as unfair competition, usury or be a symptom of an inflation trend in the economy. In the above cases, the state enters into the regulation and control of prices.

Precisely, the absence of control has made the logic of the price increase and its non-transparency a good port for the establishment of methods of financial speculation, money laundering, as well as the recurrence of unsanctified practices within the world of art and entertainment. galleries: A work of art, let’s say a painting, whose production value (paint, wood for the frame, and canvas) does not exceed 300 dollars is with the increase in the artist’s monetary value a perfect vehicle to transport thousands and hundreds of dollars across borders, store them in warehouses, avoiding tax regimes, or tax conditions that regulate inheritance law.

To the extent that the creation of values from virtuality and without regulation has been positive, and has given fabulous results; The marriage between price opacity, the trend of increase and the double standard of the art world has originated a spiral of price increase and a financial bubble whose contours and dynamics are drawn by some families, some galleries, some auction houses , for some art fairs, and for some collections.

The show must go on.

We know that the virtual has effects on the real, and it is not about two separate worlds. The increase in prices originated from virtuality, not products of factual criteria (such as an accounting analysis or something similar) constantly demands a sustenance in reality. To give the new price tag a real look, the circus scent has spread throughout the art world. In certain seasons, the actors of the art world find themselves in the same places at the same time: obvious destinations such as large art fairs, or fashion biennials, or in cities exhausted by the gentrification process accelerated by culture are the called “hotspots”. “Cultural ecosystems” have been created (a new denomination product of an excellent marketing strategy) through the injection of capital, (what better example than the W Miami hotel of the blue Chips collector Aby Rosen, during the Miami Art Basel).

The scenes are always the same. The great curators invited to the dinners of the great galleries. The great parties, artists with a great capacity for demagogy, interests, interests and more interests. They are beautiful days, which serve to sustain the price or increase the price of an artist: “sorry, the price is higher, because she has a participation at the biennial next year and her booth at the fair was sold out in 2 seconds.”

It is necessary to note that it is possible to trace the sociological impacts that the bubble has caused in the art world. The increase in prices, money and fame is the horizon of life for many young artists. And even, a young gallery becomes known, because it competes with the same strategies of expensive galleries. The conclusion, the more expensive it has become, the better a rule to understand the quality of a work of art. The financial spiral has given incredible results to its creators, as well as benefits to its believers, (in the end they all say the same thing: I do not do it for the money, but for the love of art),

Until the “Corona”, the crown, arrived.

In recent weeks with the emergency caused by CoVid 19, the art world has been shaken, it faces the impossibility of traveling to the “cultural ecosystems” and of maintaining the dynamics that supported the logic of the price increase, such as institutional exhibitions, etc. Hoping that the global pandemic will be a purifying element of our attitudes towards the world and towards the environment, in the face of our excessive consumption; the prophets of goodness have pointed out how galleries have begun to make the prices of works of art online and visible.

An exercise in kindness and transparency came last week with Gagosian’s email, distributed without discrimination, to all subscribers to his newsletter. Subject: Now Available — Untitled (Capri 52.56) by Mark Grotjahn. Value, $ 800,000.

Without entering into judgments about the quality of Grotjahn’s work, especially the one they are selling, the new nakedness of the galleries does not imply a return to paradise where we lived without sin and without blemish. The recurring transparency of prices is naked contrary to the price increase system, its speculation is rapidly collapsing, and the speed of the fall has forced the galleries to abandon the refuge of where opaque transactions were managed. While my friend Moritz reacted with displeasure thinking of people who have money for a piece of trash, as he considers painting without denying that he is absolutely and completely right, I was amused by the eagerness that begins to perspire everywhere.

The new moral crown of the art market reminds me of the attitude of the New York galleries affected by the hurricane. The water allowed them to “sell” the works of art supposedly in the flooded warehouses to insurance. In previous days, art transporters were less busy getting works out of warehouses at risk, but rather transporting a good number in them.

The publication of prices is the new flooded warehouse. At this time many collectors are looking for liquidity by putting their works up for sale, some at the necessary discount. With the publication of the price, the great open “secret” is affirmed, officially establishing a value at what is possibly the highest inflation point. This strategy has two objectives. First, establish a monopoly: If someone wants to sell their work, they would go back to the gallery that appears to be the highest bidder. By concentrating the works, you prevent the gallery from succumbing to price, while also preventing multiple works by the same artist from ending up at the same auction at the same time. With the monopoly you can control that the price remains stable.

Second, peace of mind for the other collectors. Officially, with the publication of the price, the gallery assures collectors, at least publicly, that prices have not changed and have not diverged due to the crisis. In other words, there is no discount opportunism. In this way, it indirectly regulates the sale transactions of works of art where it is not compromised.

The art market celebrates its new moral crown. But the cost may be too high for them, and to maintain the bubble that they themselves created they will need this time a capital greater than the one they had used to mobilize the circus machinery.

Addendum. About the morality of the art world.

The horror of murder in the middle of the street, by the state apparatus, such as the police, reveals the evil seeds of racism in a society. The United States has motivated racism as a state discourse. Their military interventions have been violations of human rights, their motivations have always been racist. The inferiority of the other. Rachel Libeskind told me how a militarization of the police has occurred since the September 11 attacks, a serious event, whose gestures are revealed with the coldness in which the extrajudicial execution occurs in front of a camera. In the same way, many more have died. His agent was wearing another uniform.

These conflicts serve the art world for its moral atonement. It is curious, like many of those who make postings revealing their commitment to African Americans, they are the same ones I have seen entering exhibitions in places, such as the Palais de Tokyo in Paris, where most of the guards are African, who are they even greet or give a polite smile. Empathy, according to Hume, is the principle of common sense.

I for my part accuse. From my Latin shore I have seen the captains of German art steering the ship of social injustice into the deep black waters of racism.