WRONG DRESS IN PLUMES OF SMOKE 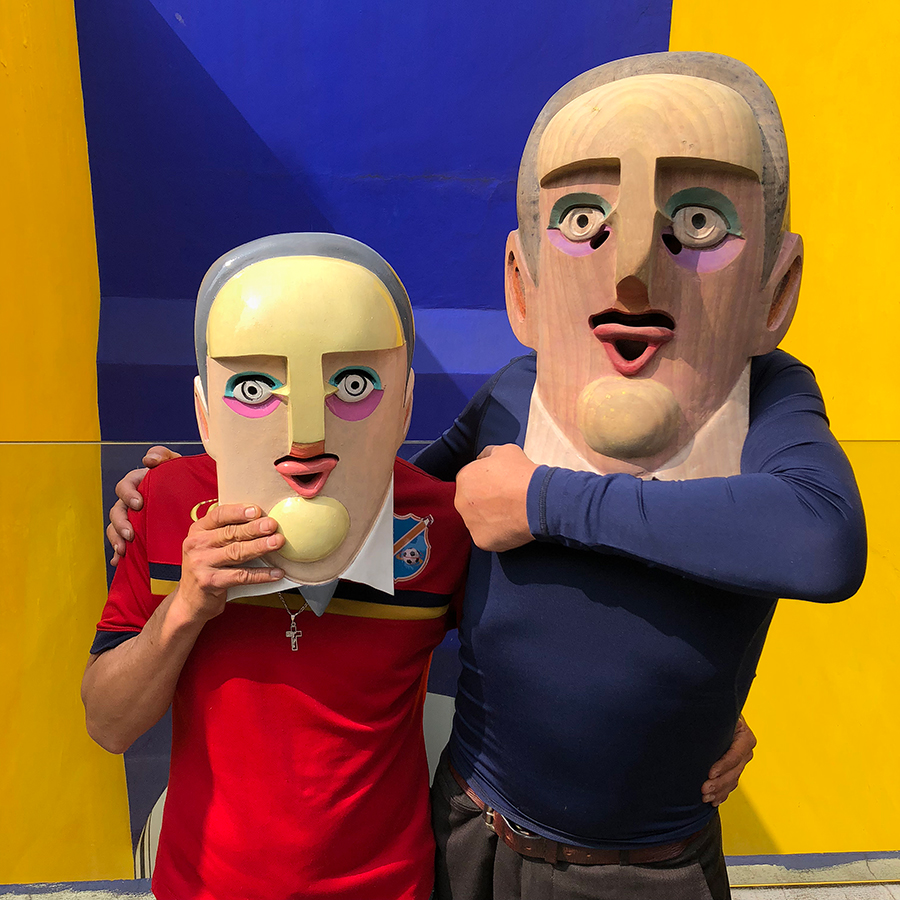 Wrong Dress In Plumes Of Smoke has been a long term project (starting in 2016), supported by Galeria Hilario Galguera and wildpalms. Its interim state Performing White Skin has been shown in Brussels and Amsterdam, and is now fully being exhibited in Düsseldorf.

Using the cultural framework of contemporary popular western culture, one can succumb to the temptation to rapidly associate the use of masks with a luck or protective charm, when considering this object subjectively. This view would also consist on an intent of unearthing or a strategy of concealment to hide ones identity or to protect one’s self from critique, or to remain anonymous, an approach that uses the dynamic qualities of costume within the context of popular parties and the carnivalesque, using costume as a vehicle for liberation within the rigid confines of how one should act morally, sexually, politically, etc. In this context, the mask emerges as a façade that evades censorship, a superficial lucky charm that enables individuals to counter the harmful consequences against their individual bodies, and their individual discourses, opinions, political postures and behaviors, etc. Lets take the example of the mask of superheroes on cartoons or the now famous mask of Anonymous. Through this scope the mask is associated with individuality, personality, and the protection of subjectivity. Nevertheless, there are other uses and effects associated with the mask that transcend the approaches of concealment or protection of individuals, an approach that doesn’t confront or oppose those previously mentioned but exists on a different plane, one described by Maite Garbayo Maeztu as one that “makes appear what disappears”.

The exhibition with Limon consists e.a. of insitu pieces, a video work and 27 wooden masks, inspired by Mexican tradition of masks that can be seen at street and religious festivals, as well as museums. The mask sculptures, central to the exhibition, are mise-en-scene into video satire. An actor soliloquizes on set, resembling a talk or interview situation, . Intermezzos of film stills functions as commentary, similar to the choir of Greek tragedy: reflection of astonishment and outrage.

Wrong Dress in Plumes of Smoke is an in-depth research on power structures and subjectivities. Everything turns into an exceptional large installation, applied to contemporary social and cultural discourses using the genre of satire.

Mauricio Limon. Born in Mexico. 1979. Living and working Between Mexico and Paris, Limon belongs to one of the most important contemporary artists in Mexico. Next to his main gallery in Mexico City, Galeria Hilario Galguera, Limon is being represented by wildpalms in Germany, and Ellen de Bruijne Proyects im Amsterdam.

Limon not only has a vigorous exhibition history of solo and group shows, but has also been nominated for the Pinchuk Prize in 2014 and received the Rijksakademie Stipend in Amsterdam in 2016.